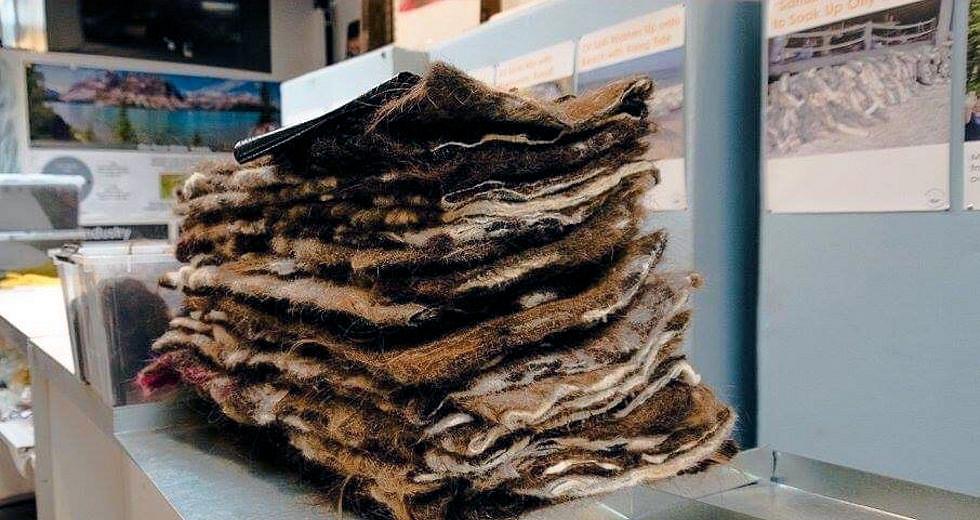 "Restia": The silent wave of success

How a shipwreck can be the springboard for a… success? And yet: when the "Agia Zoni" sank two years ago, Dimitrios Girtzalis was shocked.

He definitely wanted to do something to help clean up the sea. Anxiety he shared with his girlfriend Chryssa Krikonis, who as a translator had a greater ease of searching on the computer.

The hairdresser himself knew that hair has the ability to absorb three to nine times its weight in oils. But they learned that it can hold petroleum, grease, oil. And finally they found the solution: a filter from hair clippings that helps clean the sea.

As incredible as it sounds, not only does it work, it has been around for years in America.

So they set out to make the natural filter here as well in order to protect their country, which is bathed by the sea from everywhere. Together with three other people close to them, they created a Social Cooperative Enterprise that has not yet dated and named it, like the filter, "Restia".

What does this word mean; "It is the silent wave that is not due to an obvious cause, but to a wind that blew in a previous time or in another area and inflates the sea while the waters are calm. We chose it because it symbolizes exactly this change we want to bring with the product we produce, the message of recycling, proving that something that is in abundance and ends up in the trash, when recycled can create something very beneficial for the environment and humans. " Chryssa Krikoni, vice-president of COINSEP, tells us, and explains exactly what the Restia filter is:

"It is a filter made exclusively of human or animal hair and has the ability to absorb and retain any oil that falls on it. Dimitrios, who is a hairdresser, thought about it, on the occasion of the shipwreck, we searched for it and found that this action has been done in America for 19 years by the charity Matter of Trust in San Francisco.

They receive donations from hairdressers, pet groomers and livestock units for the hair, the hair they have to throw away, and they make these filters in their factory. We contacted them 1.5 years ago and they gave us their lights ".

The charity not only provided them with know-how from harvesting hair clippers to making filters, but also offered them the first felting machine, "a machine of nonwovens used in the past to weave felt coats." That's how they started.

"We are moving slowly and carefully, we find that there are still government agencies that do not know what COINSEP is. We are not in the production phase for commercial use and we are even looking for some subsidy / sponsorship, because until today we are dealing with personal funds ".

He speaks enthusiastically about the filter, as "it has been tested in the sea and absorbs petroleum retaining the grease that is hooked to the scales of the hair, unlike other filters that are made of polypropylene, can remain in the water only a few days and in case of their non-reflection cause more pollution. Our filter can stay in the water for up to two years. And that is the purpose, to be able to protect our sea and our waters ".

They are currently collaborating with the University of West Attica, where two students are doing their degree experimenting on the absorbency and use of the Restia filter, and with ELKETHE at a research level, while as our interlocutor in the USA informs us, it has been certified by universities. and large organizations such as NASA and the US Air Force.

They presented their filter at the Athens Science Festival, which took place in Gazi in April. Their idea has already received the first public recognition, as it was honored with the first prize for Greece by the E-Training Center for Social Enterprises (ETC4SE) supported by the European Commission under the ERASMUS + program promoting start-up social and business actions, while he will represent Greece in the final of the program that will take place in September.

They plan to promote it in municipalities surrounded by water in order to protect their beaches and at the same time have created another carpet filter product, suitable for refineries, shipyards, ships, workshops and business premises related to oil and its derivatives. which will replace the filters they already use to absorb oils in an ecological way, upgrading the working environment and respecting social responsibility.

They have already developed a network of cooperation with 17 pet stores and 15 hairdressers to supply the raw material, ie the hair clippings, and all this "without any promotion, by word of mouth, since we have not done any promotional action, beyond to print information material ".

And of course they are looking forward to όλο promoting the whole project.